Let's Get Criminal by Lev Raphael 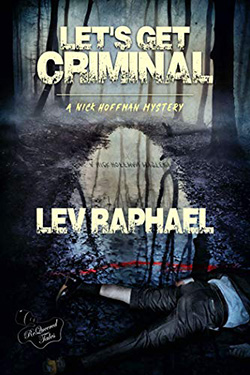 Curiosity turns to obsession at the State University of Michigan. Professor Nick Hoffman can't understand how his supercilious new office mate Perry Cross beat out other candidates for the brand new position in Canadian Studies. How did Cross get hired when he's under-qualified? Just as troubling, Nick discovers that Cross's past intersects with his own in disturbing ways. When Cross is found dead and the verdict is murder, Nick becomes a prime suspect since he was one of the last people to see Cross the evening he was killed. Nick has no choice but to investigate on his own.

“A delightful take on death in the halls of academia.”
—The Boston Globe

“This is a mystery first, with a secondary, very prominent gay relationship. The mystery helps to define and enhance the relationship, which I greatly enjoyed... Though Nick’s trust is shaken to the core, Nick doesn’t give up on Stefan, and it becomes an emotional roller coaster for both men.”
—Kristin F., Gay Book Reviews

Buy Let's Get Criminal for Kindle