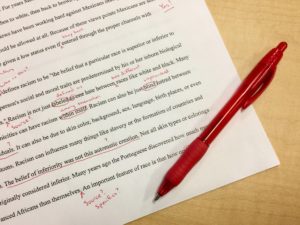 Everyone needs an editor–even editors. Why? Primarily because an editor brings objectivity to your writing. When you proofread your own writing, you sometimes see what you expect to see, what you meant to write, on the page or screen before you. The editor brings an outsider’s view and is much more likely to pick up typos or mistakes. And truth be told, auto-correct or spell-check will not pick up homonyms.

Furthermore, because of editors’ training and wide reading background, they can spot an infelicity, misstatement, or erroneous fact—not to mention a plot hole. The editor’s job is to make the writer look good by preventing the reader’s confusion, making things as clear as possible. If you’re not “traditionally published,” which would presumably include professional editing, you should hire an editor at your own expense. You’ll find it is well worth the money.

When it comes to traditional or legacy publishing, after acquisition or commissioning a book, ideally several levels of editing take place. Those can range from development and/or substance editing to line and/or copy editing to proofreading. My own experience is mainly in fiction editing, the majority being crime fiction, but I’ve worked on all kinds of nonfiction as well, from cookbooks to handbooks to how-to guides. Over forty years I’ve edited hundreds of books and I still love it. I’d rather spend my time with red pen in hand, or these days with Word Review on the screen, than doing most other things. This has served me well during the pandemic.

***
How does anyone become an editor? I doubt that any children say they want to be editors when they grow up. And I suspect that most editors originally began as writers, as did I. After first writing magazine pieces, a guidebook, and then a mystery, I decided that I’d rather tell other people how to write than do it myself. And I’ve done so ever since (although a certain amount of writing of catalog copy, blurbs, press releases, etc. is inevitable in the job). As well as learning by doing, I read books and articles on editing and joined professional organizations. 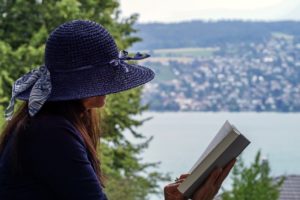 I spent the first ten years alone at Perseverance Press, editing and publishing new mystery writers who usually had other kinds of writing backgrounds. After ten of these books, some award-nominated, I went “on hiatus” and concentrated on freelance editing for mystery writers with NYC publishers. I was lucky enough to again be working with professional writers and didn’t have to deal with newbie writing problems.

But freelance editors are definitely at the bottom of the publishers’ totem poles, and liable to be blamed for all snafus. Then came the opportunity to partner with an old friend who wanted a mystery line in his small independent publishing company. And from 1999 to 2021, John Daniel & Co. / Perseverance Press published more than eighty traditional mysteries by established writers. This idyllic arrangement came to an end with John’s death, so I’m a freelancer again. And I was lucky enough to be available when Crippen & Landru needed an editor last year for their respected collections of Golden Age short fiction.

***
Does editing mysteries differ from mainstream fiction editing? Not a lot. The plot structure is usually tighter in mystery/suspense, and attention must be paid to suspects’ activities and alibis. In the end, order should be restored and readers should feel that they had a chance of figuring out the puzzle. The background environment, geographical setting, and/or the historical period in a mystery are often rendered in detail, as they may contain clues. The conscientious editor should do some research (via Google and Wikipedia these days instead of a trip to the library) to be conversant with the milieu depicted by the author. I’ve bought a lot of books on editing but have found only a few of real use: Strunk & White’s Elements of Style and William Zinsser’s On Writing Well, which I’d recommend to all writers.

Do mistakes still happen? Of course! In my early days I let an author get away with putting the protagonist in “a room with no doors or windows.” And much more recently, a main character kissed a man who wasn’t her fiancé, whom she didn’t like, and who wasn’t even in the same place as her. This goof sneaked by the author, me as the editor and two proofreaders. But of course it was pointed out in an Amazon review!

That takes me back to the first line, above….