As the HMS Downton Abbey nears the end of her final voyage, everyone has found a home or is finding one.  But does Julian Fellowes have a heart?

Carson has a Mrs. Carson. Daisy has a Daddy and a school career ahead. Edith is bound to have the newly minted Marquess rush back from Tangiers saying he can’t live without her despite her being a coward. Noblesse oblige squared.

Mrs. Patmore has saved her retirement B&B investment with some savvy PR help from His Lordship et al. (and scone power).

The Bitch-Formerly-Known-as-Lady-Mary has gotten married to someone who can deal with her attitude. It’s also a perfect match since they both look great in black and are equally stiff-backed and dull. 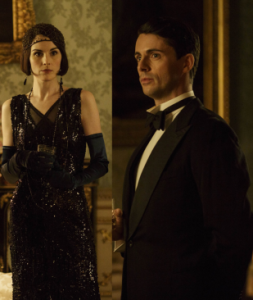 Shy Molesely (with the Dickensian name) is emerging from his tunnel and turning into an educator and liberator of the lower classes. Perhaps he’ll join the Communist Party in the next decade and prove another kind of mole when he goes into government service.

Anna and Bates are free, free, free and as passionate as Carson and his inamorata.

Tom is fat and sassy and belligerently full of his own insight. He should run for Parliament. 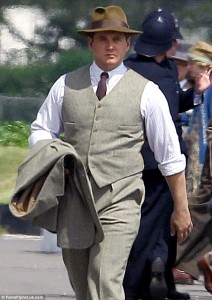 Isobel is holding her ground and likely to get what she deserves: rank, position, and perhaps a tiny Titian (Sondheim fans will know what I mean).

Even perpetually constipated Spratt has a new career as an “agony aunt” (advice columnist) under a pen name.

But what about Barrow? He’s done and said lots of nasty things in previous seasons, but he’s been wandering through this season looking like St. Sebastian without the arrows (or the loincloth). And Fellowes had him attempt suicide. Seriously?

Isn’t it time he got a break–and some love?

I’m hoping that in the final episode, Big Ears (Andy) will reveal that he really doesn’t want to learn about pigs–that he was just trying to be a manly man (and Yorkshire Lumberjacks Ltd. weren’t hiring). 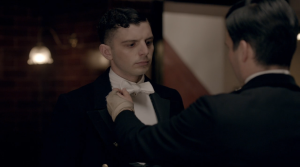 What Big Ears really really wants is to get all D.H. Lawrence with Thomas–especially now that he’s helped the others take off Barrow’s wet clothes after the suicide attempt and put him to bed. Change of clothes, change of heart, perhaps by way of a sponge bath? Or some surprisingly gentle towel action?

The love that dare not speak its name doesn’t have to. An epiphany wouldn’t be in his vocab, but why can’t Big Ears have one all the same, and why can’t Barrow have a happy ending?

Lev Raphael is the author of The Edith Wharton Murders and 24 other books in genres from memoir to biography.