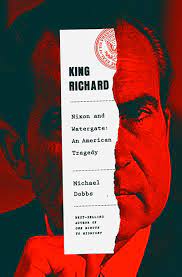 King Richard by Michael Dobbs charts the calamitous fall of Richard Nixon from his landslide election victory in 1972 to the collapse of all attempts to keep Watergate from plunging his entire administration into chaos.  That happened in just 100 days.

With the feel of a firsthand diary, thanks to the infamous tapes and many diaries, the book is a mesmerizing story of overweening pride and rampant mendacity.  And it’s filled with people who are so over-the-top in myriad ways that the tragedy keeps veering into burlesque.

The dynamics of disorder and dysfunction that Dobbs describes are eerily reminiscent of the term of our previous president which didn’t end in resignation but insurrection. Trump is never mentioned, but after four years of lies and craziness, it’s hard not to think of the former president on almost every other page.

–Both Nixon and Trump were intensely paranoid and convinced that the world never gave them enough credit.

–Both men felt besieged by “enemies” and hated the media.

–Both men were surrounded by sycophants who alternated between  lavish, obsequious praise and doing their best to ignore illegal or  impossible orders.

–Both men had an unquenchable desire to be admired, extolled, glorified.

–Both men were grievance collectors and wanted to use every arm of the government to punish anyone who criticized or crossed them.

–Both men were given to long wandering conversations and late-night phone calls which exhausted minions had to put up with.

–Both men were cowards, unable or unwilling to fire people directly, delegating that task to staffers.

–Both men falsely believed they were bugged: Nixon asserting that his plane was bugged by the Humphrey campaign in 1968, Trump tweeting crazy claims that Obama wiretapped him.

–Both men had an unhealthy obsession with a previous president who overshadowed them and got much better press: For Nixon it was JFK and for Trump it was of course Obama.

–Both men had an exalted sense of their own power.  Trump claimed “I alone can fix it” and Nixon told a subordinate “I’m the only one…in the whole wide blinking world that can do a goddamned thing.” Nixon was speaking of the exploding Watergate scandal, Trump about the catastrophic state he saw the U.S. in, from the economy to our global status.

Nixon was smarter and more successful, certainly on the international stage, up until his hubris, lies, and inattention brought him down surprisingly early in his second term.

Dobbs has used a novelist’s tools to tell this amazing story about a President who doomed himself.  Beautifully written, filled with sharp and sometimes stunning details, the book reads like a thriller and would make a dazzling series along the lines of House of Cards.

Lev Raphael is the former crime fiction reviewer for the Detroit Free Press and the author of 27 books in genres from memoir to mystery.  His latest crime novel is Department of Death, which Publishers Weekly called “immensely enjoyable.”