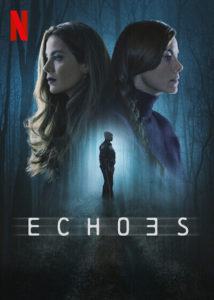 Now and then I stick with a mystery novel or series not because it’s engrossing but because it’s such a mess I keep wondering if the writer or writers can possibly fix it by the end.  And I also wonder if it’s going to get much worse, which I guess could be classified as morbid curiosity.

That’s the case with the new Netflix miniseries Echoes, which is the dumbest mystery I’ve seen this year.

The twin sisters in Echoes aren’t just close, they’re interchangeable. Or so they believe. One lives in LA, the other in Virginia and every year they have a birthday together someplace fun like Paris.  Before they leave their joint celebration, the twins change clothes and identities. Then they go back home for a year until the next birthday bash and the next switch.

Okay–without any spoilers–we’re supposed to believe that each one sleeps with the other’s husband and neither husband notices the slightest difference in how they’re touched, kissed, fondled, whispered or cried out to.  Let’s forget sex for a moment. What about how they move, smile, laugh, read, walk and every other element of being themselves?  Are we supposed to believe the husbands are stupid and grossly unobservant?

It’s not just their husbands who seem completely blind. Their elderly father can’t seem to tell them apart either, and just as bizarrely, Eli’s daughter Mattie doesn’t notice that one year her mother is Gina and the next one it’s Eli.  One twin says their mother was the only one who could ever tell them  apart.  Yeah, right.

When the switching is finally revealed, one of the people affected by it actually thinks it’s just fine and all about “self-discovery.”  That scene is laughable and psychologically ridiculous.

The whole miniseries feels badly edited, badly written and badly thought out, with Michelle Monaghan looking as vexed as viewers might be when they wonder “What?  Seriously?”  time and again.  There’s a plot, apparently, involving a stolen horse that never makes much sense because it’s not clear why the horse is in Eli and Jack’s stable.  And they have money troubles that everybody in town seems to know about but are never fully explained.  Oh yeah, Gina goes missing, sort of.  There are thugs and jarring, cryptic flashbacks too.  And a murder.  Of course.  And a third sister who is never fully integrated into the story.

Just as bad as the general vagueness and unbelievability is the obnoxious score that says “This is ominous!” every few minutes no matter what Eli or Gina are doing.  You want to say to the composer: give it a rest, dude.

The cast of Monaghan, Matt Bomer, Daniel Sunjata and Karen Robinson are wasted on very thin material that might have worked better as a 2-hour TV movie than a 7-episode miniseries.  Might have–without the totally ridiculous ending.

Lev Raphael is the former crime fiction review for The Detroit Free Press and author of 27 books including 10 crime novels.