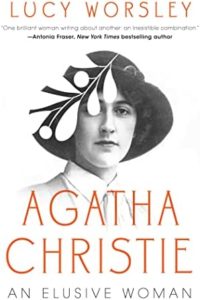 This engaging biography explores why and how Agatha Christie in effect lived a life of disguise: Despite her international fame and mammoth audience, she sought to be inconspicuous.  Not an easy task given that fans could come from as far away as Finland to try to meet her–and bang on her door!

When Christie was growing up, the ideal British woman and wife was like the one depicted in a revoltingly sentimental poem by Coventry Patmore, “The Angel in the House.”  This ideal figure was meant to be “devoted and submissive to her husband….passive and powerless, meek, charming, graceful, sympathetic, self-sacrificing, pious, and above all–pure.”

Christie was anything but passive, however, in both her marriages or when dealing with agents, publishers, and directors.  As a young woman she was funny and flirtatious despite being shy, a great dancer, loved to surf and seemed nothing like the grande dame we see in later publicity photos.  Through most of her adult life she was a “compulsive writer” despite self-deprecating remarks about her work as an author and she could turn out a fine mystery in six weeks when inspired.

If she were alive today, she might be a fan of makeover shows on HGTV because one of her great loves was buying a house, then remodeling and redecorating it.  At one point she actually owned eight homes.

The book devotes a great deal of time to Christie’s famous “disappearance” in 1926 when she seemed to be missing (and possibly dead) for almost two weeks.  Worsley does a fine job untangling what really happened amid of welter of possibilities, and is especially clear on how Christie’s image seemed to suffer at first when journalists and others suggested it was a publicity stunt.  That story gripped England and America, and readers might be surprised at how sexist some of the contemporary analysis of her reasons for going off the grid were.

Curiously, the author doesn’t tell us anything about Christie’s sales figures until almost midway through the book.  That’s especially puzzling for her early books.   Surely sales figures are a significant part of her story as a famously best-selling author who’s sold more books than anyone else in the world?  And how can we judge the success of her early books–or even later ones like Death on the Nile–without comparisons to books by her contemporaries?  Worsley also classes a number of Christie’s techniques as “tricks,” which seems a strange label.  There’s nothing unusual about novelists using real settings and real news stories in their books–it’s common practice.

Mystery fans can sometimes be ticked off that the genre they love is considered inferior  to Literature, but what struck me as revelatory was the sexism she face throughout her career. Christie was demeaned, diminished, and derogated not because of her genre but primarily because she was a woman.  Far too many critics couldn’t resist saying something sexist when they reviewed her books or plays.

In An Elusive Woman, Christie has found a keen-eyed and witty biographer who honestly assesses her strengths and weaknesses, and makes a solid case for considering Christie one of the 20th Century’s most important writers.

Lev Raphael has reviewed books for The Detroit Free Press, The Washington Post, The Ft. Worth Star-Telegram, Jerusalem Report and a handful of public radio stations.  He recently reviewed a collection of Christie ghost stories and a volume of new Miss Marple stories.