If you need to laugh in these troubled times, Less might be just right for you.  A book of sly wit and comedic gusto, it’s one of the funniest novels I’ve reviewed in years, a wicked take on the writing life–and much more.  And it’s only the fourth comic novel to ever win the Pulitzer Prize for fiction.

Greer’s hero Less is a novelist who’s “too old to be fresh and too young to be rediscovered.” Facing fifty has doubled his sense of failure and impending doom.  Desperate to escape an ex-lover’s wedding, he’s actually constructed his own around-the-world author tour made up of wildly disparate events.

His ports of call? Mexico, Italy, Germany, India, France, Morocco, Japan—all of which he observes and appreciates with the eye of a poet. And why not? He spent years in love with an older, Pulitzer-winning poet—a certified genius who was as hard to live with as a tiger. That demanding, driven poet unintentionally deprived him of a separate identity. Less is still better known for his ex-lover than for his own work—and he’s not remotely Kardashian enough to make a career out of that.

Wherever he goes, Less faces “writerly humiliations planned by the universe to suck at the bones of minor artists like him.” He’s publicly pronounced to be mediocre, he’s informed that his work isn’t gay enough, he’s mocked in Germany where he confidently speaks enough German to confound and annoy people around him because of his awful blunders. Yet this holy fool is sexually charismatic in his own way, apparently able to stun men with just a touch…though he’s not remotely a great lover. 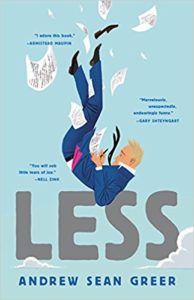 I laughed all the way through the book, recognizing publishing types like the withholding literary agent, and I rooted for Less to become more. More forceful, more insightful, and more in control of his own life. I won’t reveal whether he does any of that, the ending, or how ingenious Greer’s narrative is, but I have to praise his gift for striking, off-kilter images like these:

The view out his window was of a circular brick plaza, rather like a pepperoni pizza, which the whistling wind endlessly seasoned with dry leaves.

In the suburbs of Delaware, spring meant not young love and damp flowers but an ugly divorce from winter and a second marriage to buxom summer.

Less was so deeply satisfying that I put everything aside last year to read it straight through one weekend. Colorful, hilarious, incisive, and surprisingly moving, it deserves to be read alongside satirical classics about the writing life like Somerset Maugham’s Cakes and Ale and John Updike’s Bech at Bay.

Lev Raphael is the author of 25 books in genres from memoir to mystery and teaches creative writing at Michigan State University and on line at http://www.writewithoutborders.com.