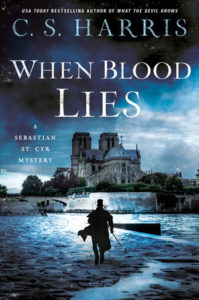 You can judge a book by its cover when it’s a C.S. Harris Regency mystery.  The gorgeous covers are elegant, mysterious, evocative and haunting. And that’s the kind of historical mystery Harris writes, fielding a hero I dubbed the “Regency Jason Bourne” a few years ago.

He’s Sebastian St. Cyr, a Byronic English nobleman with some dark family secrets, a brilliant wife, and a powerful Machiavellian father-in-law with whom he’s often been at loggerheads.  A distant cousin of George III who wields tremendous power, this father-in-law is a “ruthless, eerily omniscient man with an enviable network of spies, informants and assassins.”

But St. Cyr is more than a match for him or any opponent: He’s strong, clever, a gifted sleuth, blessed with supernaturally acute hearing and eyesight, and dangerous when threatened or crossed.

Remember the scene in The Bourne Identity where Bourne is sleeping on a park bench in Switzerland and suddenly disarms and knocks out two policeman who want to see his papers?  That’s the kind of surprisingly quick, efficient act St. Cyr can perform as easily as tying his cravat.  He may look like a toff but he’s a bruiser when he needs to be.

Our hero is now in Paris searching for the mother who abandoned the family years ago, and that search of course leads to what seems like endless darkness before there’s light.  His journey starts with a shocking and heartbreaking discovery in the first few pages.   Harris is deft at writing opening chapters that grab you without feeling gimmicky and the opening chapter of When Blood Lies may be the strongest and most startling she’s ever written.

It’s 1815 and France is “a witches’ brew of rumors and swirling threats of conspiracy” after over two decades of “death and heartache, terror and disaster, resentment and fury” due to revolution, war, and roiling regime change.

St. Cyr soon learns that his mother has been deeply enmeshed in France’s current turmoil in ways he cannot guess.  His investigation will require speaking to  a wide cross section of Parisian humanity including royalty, an executioner, the police, an inn keeper and many more.  This diversity is part of what makes the series so fascinating; Harris’s canvas is always large and colorful.

Looming over every interaction and conversation, it seems, is the shadow of Napoleon, seemingly trapped on Elba.  Ditto the echoing cries of mobs lusting for bloody spectacle when thousands of men, women, and children were guillotined during The Terror.

I can’t think of many crime writers who can so perfectly create a scene by appealing to all your senses the way Harris does.  Her fiendish plots, her deeply drawn characters and their tangled relationships are just plain thrilling.

Lev Raphael is the author of 27 books in many genres and was the crime fiction review for the Detroit Free Press for a decade.  He mentors, coaches, and edits writers at writewithoutborders.com