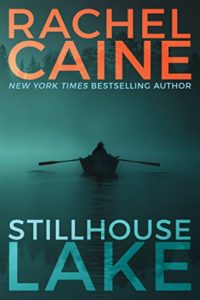 I’ve been reviewing mysteries and thrillers since the 90s and it’s been a very long time since I got goosebumps reading a crime novel. And even longer since I felt torn between rushing ahead to find out what was going to happen next and slowing down to savor and marvel at what an amazing book I was reading.

Rachel Caine’s Stillhouse Lake is that book. It’s beautifully crafted, scary and terrific in every single way: plot, characterization, style, and pacing. Hell, even the cover is creepily perfect.

Caine avoids a trap many thriller writers fall into: her action scenes are as clear as possible without an excess word, and you always know exactly what’s happening. Equally important, she’s also a deft psychologist, capturing every single nuance of Gwen’s struggle in lean, evocative prose. Gwen’s love for her children is so intense the book practically blazes with that love. Her torment is just as intense. How could she have been so naive as to marry a man who was a heinous criminal–and not figured him out? The shame, the guilt, it’s all there, dramatized and heightened as one great plot twist follows another.

I actually read the prologue and first chapter twice because I was so blown away by the power and intensity of what Caine was doing, and by the plight of a deeply sympathetic narrator whose life may never be restored to any semblance of normality.

I’ll say it again: this is a perfect thriller. So prepare for plenty of OMG moments, and for losing lots of sleep.

Lev Raphael is the former crime fiction reviewer for The Detroit Free Press and author of ten Nick Hoffman mysteries and seventeen other books in many genres.  His work has appeared in fifteen languages.