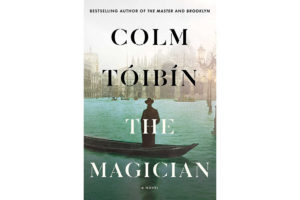 As a reviewer for many years in print, on-air, and online, I’ve gotten used to books being hyped to help the author gain a foothold in a crowded market.  But the fulsome book jacket copy for Colm Tóibín The Magician, a novel about German author Thomas Mann, is the kind of effusive panegyric that can often make me decide to skip a book because it’s just so over-the-top.

Jacket copy for The Magician raves that “Reading him is among the deepest pleasures our literature can offer.” That’s the kind of hyperbole Tóibín’s work has received from critics in the past, and it’s always turned me off.

But I did my best trying to read this novel because a good friend wanted to share it with me and compare notes.

It wasn’t really a difficult decision for me to make, even though I’m not a fan of the author’s previous work.  Thomas Mann, however, is an author I’ve enjoyed in the past.  I’ve read some of his fiction, a biography as well as a biography of two of his children in which he understandably looms large.  Mann was also a favorite author of my late mother, who read him in German, so I have a kind of sentimental connection to him too.

Mann was a winner of the Nobel Prize for Literature and is probably best known for his novella Death in Venice (made into a stunning film by Luchino Visconti) and his sprawling novel The Magic Mountain.

The Magician does have have some good period detail of northern Germany in the late 1800s, but I found it very uneven and at times flat and listless. Several things stood out for me as problems an editor should have helped the author fix: Mann writes stories and has them published but we don’t always know what they’re about–why not? This is a book about a writer, yet it doesn’t tell us enough about his writing.

Then Mann writes the novel that made him celebrated, Buddenbrooks, but how long does that take? We don’t know. Again, why not? It almost feels as if the author is doing a Best Hits of Thomas Mann, name checking them as the story drags on and on. And why are some characters described in detail but many others aren’t, even important ones?

Perhaps in choosing Mann, the author was trying to recreate his success writing about Henry James in The Master.   If so, it was a misguided attempt because the book never quite takes wing and is anything but masterful.  Picking up the book wasn’t difficult for me, as I noted above, and neither was putting it down.  Maybe he’d have better luck with a lesser writer like Edgar Bulwer-Lytton who in his day outsold Dickens but is almost unreadable now.  Reading about a faded idol like that might be engaging in ways this book is not.

Lev Raphael is the author of 27 books in genres from memoir to mystery and has taught creative writing at Michigan State University.  He’s done 100s of talks and readings about his work in 9 different countries.