Difficult, demanding mothers and abusive fathers are a staple of contemporary fiction, but The Winter Sister by Megan Collins gives both of those tropes an exciting new spin.

Her heroine Sylvie has lived with guilt and shame for years because of something she did that she feels led to her teenage sister’s murder. Though Sylvie is a talented painter, she’s something of a slacker. At thirty, she’s marking time in a tattoo parlor for complicated reasons that emerge over the course of the novel.  She still hasn’t found her way out of the maze of her traumatic childhood.

But confronting everything that’s held her back becomes inescapable when she returns home to care for her cancer-ridden mother Annie, who descended into alcoholism after the murder of her other daughter, Persephone. That addiction proves to be more complicated than it seems, because Sylvie’s mother “swallowed her secrets like pills, then chased them down with something she’d hoped would drown her.”

The murder was never solved but Sylvie is sure her sister’s boyfriend did it.  Is she right?  Is she wrong?  Is she even safe herself? 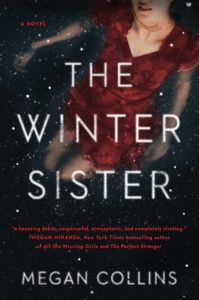 Why her mother gave Persephone a name from Greek myth is a significant part of the plot, and that myth is woven into the fabric of the novel.  Huge surprises lie ahead for Sylvie as well as the reader in this taut, beautifully written, tightly plotted, totally absorbing novel that may move you to tears.

Collins is a gifted writer: she takes you into the emotional lives of characters who are lost in suffering without bludgeoning you, and her graceful, evocative prose weightlessly carries a dark but redeeming story forward on every page.  I read it in two days because I couldn’t put it down.

I’ve been reading mysteries for years and was the crime fiction reviewer for The Detroit Free Press for a decade and The Winter Sister feels fresh to me. It may share some plot elements with many other novels out there, but reading it, you feel invigorated by Collins’ deft touch in writing about small town New England life and damaged souls desperately in need of healing, forgiveness, and love.

Lev Raphael is the author of 26 books in genres from memoir to mystery.  Lev teaches creative writing workshops and offers editing and mentoring at writewithoutborders.com.  In June he’ll be teaching Mystery Writing 1.0.