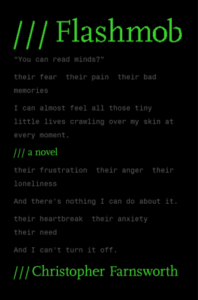 The opening line of Christopher Farnsworth’s clever new international thriller Flashmob sounds like something Huck or Charlie might say on Scandal: “It’s not easy to find a nice, quiet spot to torture someone in L.A.”

The narrator John Smith is actually facing torture when we meet him working “executive protection” for a Russian billionaire’s son. But he’d make a great addition to Olivia Pope’s Scandal team because of his unique talent. Ex-CIA and Special Forces, this former “psychic soldier” can read minds. Messy minds, simple minds, and everything in between.

That means he’s able to anticipate an opponent’s moves; silently interrogate anyone interrogating him; and disarm people just by hitting them with vicious memories or activating parts of their brain to use against them. That’s not all. As Smith puts it: “I’ve got my wired-in proximity alarms, the radar in my head that tells me whenever someone even thinks about doing me harm.” So it’s almost impossible to surprise him or sneak up on him.

But all that knowledge comes with a price. It leaves him with a physical and psychic burden he can only ease by heavy doses of Scotch and Vicodin—and even Valium and OxyContin on top of the mix on a really bad day. Reading and manipulating minds is a curse as much as a gift. Other people’s thoughts, memories, and feelings stick to him like he’s some kind of emotional fly paper and he powerfully describes it at one point as something far more disgusting. Still, while he may be a freak of nature, there’s no way you won’t empathize with him because he’s not a psychopath, he’s one of the good guys.

I’ve been reviewing crime fiction since the 90s in print, on air, and on line and it’s almost a cliché for authors to make their protagonists wounded in some way. Contemporary readers want their sleuths to be touched by darkness. In this case, it’s Smith’s amazing strength that profoundly weakens him at times. That offers a very original twist in a creepy tale about stalking, social media madness, celebrity, the Dark Net, privacy in the digital age, Internet cruelty, cyber crime, and mob psychosis.

The author’s also a screenwriter and journalist, which is a bit surprising, because the book could have used less exposition and tighter flashbacks. In effect, Smith is an omniscient narrator and while it’s intriguing to see him navigate “the competing agendas” inside people’s minds, sometimes his excursions into other characters are a drag on the plot’s momentum. Conversely, his descriptions of places and people lack color.

But in the end, none of that detracts from the deft story-telling and the explosive finale which made me think of master thriller writer Joseph Finder. Flashmob is truly disturbing. It’s one thing to worry about computer programs that can perform highly intrusive surveillance on you, it’s another to think of people who can insidiously do the exact same thing mentally while drinking a cappuccino just a few tables away from you at Starbucks.