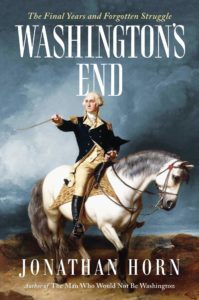 Like other school kids, I was steeped in reading about the Father of Our Country from elementary school onward, but my fascination with George Washington had a personal backdrop.  I lived in Washington Heights in Manhattan, and our apartment building was on Ft. Washington Avenue.  My high school was named after him as well.

It created a sort of kinship which was deepened by studying his famous letter to the Touro Synagogue in Rhode Island where he promised that the new nation “gives to bigotry no sanction, to persecution no assistance.”  More than that, he wrote that Jews were not going to be less equal than Christians: “It is now no more that toleration is spoken of, as if it was by the indulgence of one class of people, that another enjoyed the exercise of their inherent natural rights.” (Slavery, of course, was a giant asterisk to this discussion)

How could a son of Holocaust survivors who came to American for freedom not admire a man like the author of that letter?  A man who could have been king if he wanted to, given how so many people idolized him.  But at the end of his second term as president, having steered the fledgling nation from revolution to democracy, he chose to ride off to his Virginia estate, leaving politics and governing behind because the quiet life of a farmer with large holdings suited him best.  He faded gently from the scene, appropriately aloof from politics.

As Hemingway wrote, “Isn’t it pretty to think so?”

In fact, Horn shows through brilliant use of contemporary letters and newspapers from a wide range of figures that Washington may have been offstage but he was as deeply embroiled in politics as ever.  He scrupulously followed every twist and turn of the rivalry between the two parties forming around President Adams and Vice President Jefferson and was keenly alert to the threat of war with our former ally France.  And for anyone who knows Alexander Hamilton only from the musical, he cuts a much less dashing figure here, and had delusions of grandeur.  But then Hamilton fits the general turmoil of jockeying for position against a background of tremendous political and global instability.  Many of our Founders and their supporters had their diva moments.

In the middle of all this Sturm und Drang, you feel the sorrowful isolation of Washington who complains of “Having staked my life–my reputation–my fortune–my ease, tranquility & happiness–in support of the government of our country” when at every turn fate might undo all that effort and plunge the United States into bloody chaos.

Yet there’s the wildly comic dithering about what kind of insignia officers for the new army being formed should be wearing, and you wonder how anyone could be so concerned with minutiae at a time when war with France was looming–or seemed to be.

Horn’s deft use of letters reveals the daily reality of Washington’s “retirement” and his recruitment as commander-in-chief.  President Adams realized that Washington was the best person to lead a newly strengthened army in case the French decided to invade the US.  He did not have to be on the scene to be caught in the tug of war between Republicans and Federalists and affected by war fever.  Just as important was his abiding concern about the legacy he left behind in his voluminous papers.

And if you thought our current political climate was newly poisonous, think again.  The scheming and invective between various factions around Washington before and after he left the White House were every bit as vicious, cruel, and divisive as today.  The main difference is the speed at which the poison spread and the tools used to spread it.  The rhetoric employed today to eviscerate your opponents is a lot more juvenile and not remotely as witty, either.

This book is everything you could ask for from a popular biography. It’s beautifully written, dramatic, compelling, colorful, revelatory, refreshing, sometimes hilarious and sometimes shocking–and at times it reads like a thriller.

Best of all, it makes Washington relatable and human, not a portrait, not a monument.  That’s the author’s greatest achievement.

Lev Raphael has reviewed for The Washington Post, The Detroit Free Press, Jerusalem Report, The Ft. Worth Star-Telegram, several public radio stations, and had his own on-air book show where he interviewed authors like Salman Rushdie and Erica Jong.