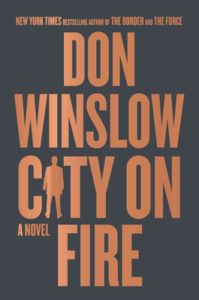 In my many years as a book reviewer I’ve seen publishers wildly hype their books as if the whole publicity department was on coke, but the jacket copy for Don Winslow’s latest book hits a new high for hyperbole.

His publisher lauds the book as “a towering achievement of storytelling genius” and “a contemporary Iliad.”  I guess they had no choice about the latter label since the author heads each section of the book with an epigraph from that poem.

But City on Fire is not an epic and doesn’t deserve that kind of adulation.  It’s a fairly clichéd story about warring Irish and Italian mobsters that feels as if the author binge-watched The Departed, GoodFellas, The Godfather and The Sopranos (and possibly Casino) before hitting his laptop.

Familiarity isn’t the only problem. The characters are pretty one-dimensional and Winslow introduces too many of them too quickly, without enough identifying traits to make them clearly individualized.

One Amazon reviewer tartly observed that too many characters in the book have similar names: “You need a note card to keep track of who is on which side.”  Why didn’t Winslow’s editor suggest more variety?  That would have fixed passages like this one:

“They walk out onto the beach, where Pat’s helping Pasco dig clams out from the pit, and Peter and Paulie and their crew are standing there watching them.”

There’s a seemingly endless series of hits and counter-hits that can make you feel trapped in a violent Groundhog’s Day. And who thought it was a good idea to have several chapters of flashback after the opening chapter?  Or later on, dedicate almost twenty pages to one character’s backstory?

As for the upper-crust femme fatale Pam who’s the catalyst for escalating violence, she’s way too bland and her Greenwich, Connecticut background too clichéd.  There’s also something comical about her being described as wearing a bikini “that does more to accentuate than conceal” her body.  Aren’t bikinis revealing by definition? Doesn’t the publisher employ copy editors?

When writing about Pam, Winslow can sound like a bad romance novelist.  Describing her transformation from a plain, acne-ridden girl to a beauty, he says this:

“It would be an exaggeration to say that it happened overnight, but it seemed to have happened overnight.  Looking into the mirror to scrub her face, she saw skin that was almost clear, as if some compassionate goddess had come during the night and stripped her of her shame….Over the next few weeks, the sun turned her skin a clear tan, baked her body into fine marble, bleached her ‘mousy’ hair to a golden blond, her eyes an oceanic blue.”

On the plus side, there are intriguing and sometimes humorous details about Rhode Island, a state most Americans don’t know much about.  By far the strongest aspect of City on Fire is the tough guy voice, but it’s not enough to carry the slow-moving and overly talky story for 350+ pages.  The heavy use of the present tense makes the book drag even more.

In the end, epigraphs from The Iliad do not transmogrify any of the criminals in this book into Greek or Trojan heroes.  They just make everyone seem puny.

Lev Raphael was the longtime crime fiction reviewer for The Detroit Free Press before moving to public radio where he had his own interview show.