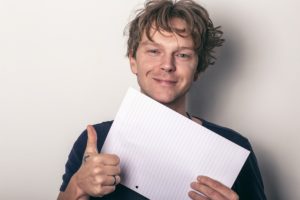 You can say “No” to rejections.  But I don’t mean arguing with the editor or readers who’ve declined your work and given some specifics.

Because you don’t want to be like my writer friend who was once furiously typing an argumentative reply after a rejection.  His wife saw what he was doing on his laptop and quietly asked, “Do you want to be known as a good essayist or as a jerk?”  He wisely deleted the document.

What I do mean is not taking the rejection to heart–though that can difficult–and assuming that the comments you get were on-target and you should immediately start revisions.  It’s worth considering the feedback, sometimes just briefly, and then asking yourself:

–Do these suggestions or questions spark anything?

–Do they make you want to write a revision ASAP?

–Do they confirm any doubts about the piece you had?

As an editor myself, I know tastes vary widely.  That friend above once said to me “Finding the right editor is as difficult as finding a partner.”  Then he added, “No, it’s harder.”  He wasn’t kidding.

I’ve had dozens of terrific magazine and newspaper editors, two dozen more when I contributed pieces to anthologies, and editors working with me on 27 books published since 1990.

If I feel an inner thrill reading a comment, have an Ah-hah! moment, or just confirmation of some question I had about the story or essay myself, that’s when I go to work because I love revisions with good but not overbearing  guidance.

But if the comment seems contradictory or just leaves me feeling “Huh?” then I trust that intuition and don’t bother tinkering with the piece.  I wait.  I’ve had more than one piece in recent months snapped up by editors who loved them and in each case easily half a dozen editors had passed on the same story or essay.

Of course, if everyone rejecting your work makes almost identical comments, then maybe there’s something there for you to consider.  And maybe not.  Maybe your work doesn’t resonate with them.  Move on.

I make sure that I have “back-up submissions” ready whenever I start sending out something new.  Each time I get a rejection, I send the piece out somewhere else within an hour so that I’m not chewing over the sting of rejection or second-guessing myself.

Sometimes readers or editors (or both) will want you to overhaul your story or essay completely and write it the way they would have done, though they don’t actually say that.  I remember one short story of mine getting a two-page letter explaining how I needed to be writing like Balzac–and why.  It made me laugh because though I’d read many novels of his, I had no interest in painting a broad social canvas in that story.  It was more intimate.

The story was later accepted elsewhere, anthologized too, and singled out by reviewers.  That helped take my career to the next level.

I hadn’t changed a word except for the last line, which a very smart editor knew had to be stronger.  He was right and I was grateful.

Lev Raphael is the author of 27 books in genres from memoir to mystery.  He mentors, coaches, and edits writers in the U.S. and abroad at writewithoutborders.com.  You can contact him via that website for a free consultation.