Isn’t it amazing what people think they can say to authors at signings or readings?

They’ll criticize characters, plot, writing style, or the way a book ends–and rudely, too.  And then not even buy a book.  They’ll just unload on the author who’s a captive and has to be polite and just take it, no matter how unfair and uninformed the comments may be.

Sometimes events can work your last nerve, but sometimes the situation’s just different enough where you don’t just take it.  That happened to me once at a university where things went awry from my getting off the plane.  The minion picking me up announced that she had no sense of direction, and got me lost 1) in the airport 2) in the parking structure and 3) in the city on the way to my hotel when we went drove in the wrong direction for at least ten minutes.

When we finally got to it, the hotel room in a dinky “annex” was filthy with cobwebs and dust balls everywhere.  I called the host professor and asked to be moved somewhere else, but he insisted on seeing it for himself, assuming I was a diva, I guess.  He took one look and moved me to a Hilton Garden Inn.  But that was the end of his competence, because rather than do a short intro to my talk and reading, he read from my official, page-long author biography.  Slowly.

I timed him.  It took ten minutes.  And he stuttered.  Still, I made it through and was doing fine until the Q&A when someone raised my first novel Winter Eyes where a son of survivors is unsure of his sexuality and sleeps with a man and a woman at different times.  That gay reader accused me of “brutalizing” him with the open ending, and leaving him alone with his pain. 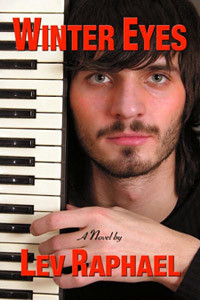 I wasn’t rude, but I said plainly that he had misread the book and the characters who believed at the end that labels didn’t matter at that moment in their lives.  And if he was in pain, it wasn’t the fault of my book, but his issues that he needed to deal with.

I’d never been that assertive in a Q&A, but it had to be said.

Would I have replied as I did if the afternoon and early evening had gone better?  Maybe not.  But I felt I had to stick up for myself as an author and stick up for my book.  And for authors everywhere….