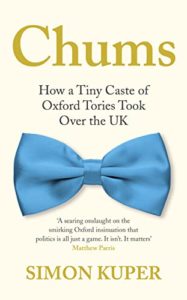 If you’ve ever wondered how someone as goofy as Boris Johnson got to be  prime minister of the UK, Chums by Simon Kuper is the book you need to read. Short, sharp and devastatingly insightful, it explains how a tiny clique of posh and semi-posh conservative aristocrats and wannabe aristos have ruled Britain on and off since 1945.

They almost uniformly attended Eton where they learned both public speaking and self-presentation as an art.  Charm, cutting wit and discoursing on subjects about which they were ignorant (or close)–and their privileged backgrounds–proved a gateway to Oxford.  Once there, they continued to be focused on style over substance.

Playing student politics in surprisingly byzantine ways prepared them for positions in Parliament and government (sometimes by way of journalism), positions which they believed they deserved.  After all, hadn’t their class historically been in charge?  More than one felt that entering Westminster was “coming home.”

Boris Johnson seems like the apotheosis of this trend, with his endless blather, his comic hesitations, and his “shambolic” hair:  a rumpled Bertie Wooster. Oxford was his dress rehearsal: In a setting that emphasized and rewarded eccentricity, he was glib, clever, entertaining–“an unthreatening funny man.”

Did he and his ilk stand for anything?  Power for themselves and a fantasy of Britain when it ruled he world or seemed to.

Brexit was something they cooked up as students and young men well before they actually had any power, and their well-documented deception and fakery around the vote to remain or stay in Europe has changed history.

For the “Brexiteers,” Brexit was the grand cause [they] had lacked all their political careers.  It would give them a chance to live in interesting times, as their ancestors had.  It would raise the tediously low stakes of British politics.  It would be a glorious romantic act, like the Charge of the Light Brigade, only with less personal risk.”

Chums is a ruthless, penetrating, and very funny indictment of a tiny class of Britons who show no sign of letting go of power no matter how hapless or wrong their policies are.  They believed, in the words of author Anne Applebaum “that is was still possible for Britain to make the rules–whether the rules of trade, of economics, of foreign policy–if only their leaders would take the bull by the horns, take the bit between the teeth, if only they would just do it.”

The clichés are deliberate mockery of a caste that has done irreparable harm to Britain and its citizens.  While some of the names might be unfamiliar to American readers, the dynamics of contempt and wanton disregard for the public good while aiding the wealthy should feel very familiar.

Listening to the latest Oxonian PM, Liz Truss, try to explain her new economic moves that have sent shock waves through the UK and beyond, I’m reminded of lines from The Maltese Falcon.  Humphrey Bogart asks Mary Astor “Was there any truth at all in that yarn?”  Her reply:  “Some…  Not very much.”