I’ve been watching GOT for years and have enjoyed the battle scenes, but yesterday’s over-long episode was a dud, and stole too much from World War Z and The Lord of the Rings.  It may have cost millions to film, but it looked like crap.

Yes, there were some exciting moments in the long-awaited confrontation, but they didn’t sustain almost ninety minutes of slashing and stabbing and hacking and running and shouting.  Much of it pointless, and some of it ridiculous.

My main problem was with the choices of the director and cinematographer.  Most of the episode was murky and hard to follow, especially the long periods where John and Dany piloted their dragons in the sky and it was hard to know what exactly they were trying to do or where they were.  Would it have spoiled anything to have been able to see the action more clearly or killed the writers to add even one line of dialogue?  Grunting doesn’t count.  And how was John suddenly so adept at flying a dragon when he’d only recently climbed aboard one?  Did he take a seminar?

Scenes inside Winterfell were just as murky as the ones in the air, but worse than that, they felt as repetitive as all the endless zombie attacks in The Walking Dead where the heroes stab and hack at a horde of zombies or loners. And they were very confusing because of the editing.  It would look like someone was dying, then it didn’t, then it did? That’s a cheap way to build suspense or at least try to sustain it.

Why did Arya flee to the library of all places when it wasn’t defensible? Likewise, why did we need to see her run through one hallway after another?  Yes, we got it: she was trying to escape.  Shouldn’t she have been able to find someplace better to hide–it’s her home after all. 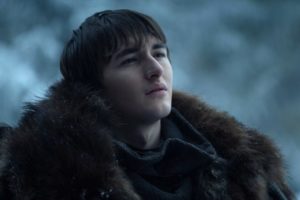 More questions proliferated.  How did Dany survive amid the gigantic scrum of the dead attacking her? Why did the Red Lady give up the ghost? Why did we have to see the Night King approach Bran in slow motion? And given his amazing powers, why didn’t Old Blue Eyes head directly to Bran since Bran was so poorly defended?  If Bran was his target, the armies massed against the White Walkers and company could have waited. The entire battle was a frigging waste of time.

Previous battle scenes in the series have been clearer, more exiting, and more coherently filmed.  Most of this episode felt like the endless last half hour of a superhero movie or action thriller.  Instead of explosions we had dragon fire.  Lots and lots and lots of dragon fire.  And dead people tumbling all over each other like lemmings.

The night-time battle at Helm’s Deep in Lord of the Rings, which was echoed throughout the episode, was much more dramatic and more clearly staged and filmed.  Halfway through last night, I didn’t care who lived or died, just hoped the episode would end soon because it was so tedious and illogical.  Final questions: Did Sansa and Tyrion really need to stare at each other wordlessly for what seemed like minutes before actually doing something?  And how did Arya suddenly appear out of nowhere to become the savior of the Seven Kingdoms?

I’m a fan of the novels, but this battle did not live up to their promise or even match previous seasons of the TV series itself.  It was dreary, dull, and self-defeating.

Lev Raphael teaches creative writing on line at writewithoutborders.com.  He is a big fan of fantasy and science fiction in print and on screen.