It started out as a fantasy.

An editor at an esteemed publishing house contacted me and asked if I had a book for him. He admired my previous work and wanted me on their list.  I was flattered and thrilled.  The timing was perfect because I did have a book, so I was soon signing a contract that gave me an advance big enough to pay for my upcoming wedding.

And then things went south.  The editing process was fine until the day before I left for a book tour in Germany and the editor told me the book was being moved up a season because the publisher loved it.  Ordinarily that would have been great news, since in-house excitement is crucial to launching a book.  But he asked me to correct the edited manuscript and get it back to him (via email) in the next two weeks.

I explained that I was leaving for a tightly-scheduled book tour, doing daily events and would be in transit when I wasn’t speaking and reading. Moreover, tours were exhausting and I didn’t feel I’d have the focus required for reviewing the book. I also worked on a PC and didn’t have a laptop, which would mean going to internet cafes. 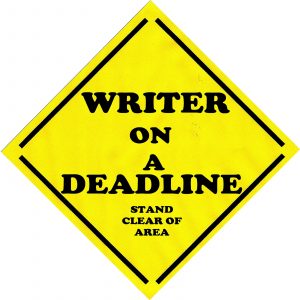 He insisted.  I thought, okay, I have to try.  But when I got to Germany I discovered that even if I tried to squeeze in some time at an internet cafe every day, there was no way I could work on German keyboards because they were laid out differently and very confusing.  My emails home were garbled and I didn’t want to risk any errors creeping into the book.

I explained all that and he said fine, he would get it taken care of.

To my dismay, when I got the book back in page proofs, there was one passage that was repeated.  I deleted the repetition while making other minor corrections. But when I got back home after the tour, the publisher himself called to tell me that it would be too expensive to re-do the book since it had gone too far in the publishing process.  He refused to fix the problem.

While I loved the book’s cover, I was mortified that it was being published with a glaring flaw.  And then a reviewer blamed me for letting the book appear with a repetition.

I felt burned, but luckily fans enjoyed the book despite the screw-up.  That’s what publishing is like, filled with ups and downs, and nothing is predictable. As novelist and memoirist Deborah Levy says, “The writing life is mostly about stamina.”