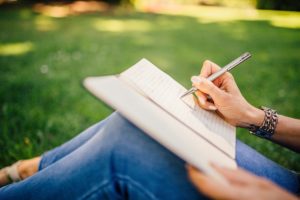 Lots of authors worry about the number of words they write per day. Some even post the tally on social media as if they’re in some kind of competition.

And if they’re not writing at least 500 or 1200 or 2000 words or whatever quota they’ve set, they feel miserable. Why aren’t they working harder? Why are they stuck? What’s wrong with them? How come everyone else is racking up the pages?

If that kind of system works for you, fine. But as an author, editor, and writing teacher, I think it can be oppressive.  Too many writers believe that if they’re not actually physically writing a set number of words every single day, they’re not just slacking, they’re falling behind and even betraying their talent. Especially when they read online about other people’s booming word counts.

How do they get caught in that kind of dead-end thinking? It’s thanks to the endless blogs and books urging writers who want to publish and stay published to write every day.  They make that sound not just doable, but the norm. Some days, though, it’s simply not possible. Hell, for some writers it’s never possible. And why should it be?

I never urge my creative writing workshop students to write every day; I’ve suggested they try to find the system that works for them. I’ve also never worried myself about how much I write every day because I’m almost always writing in my head, and that’s as important as putting things down on a page.

But aside from that, every book, every project has its own unique rhythm. While working on my 25th book, a suspense novel, I found the last chapter blossoming in my head one morning while I was on the treadmill at the gym. Though I sketched its scenes out when I got home, I spent weeks actually writing it.

Some people would call that obsessing. They’d be wrong. What I did was musing, rewriting, stepping back, carefully putting tiles into a mosaic, as it were, making sure everything fit right before I went ahead, because this was a crucial chapter. I was also doing some major fact-checking, too, because guns were involved and I had to consult experts as well as spend some time at a gun range. It took days before I even had a workable outline and then a rough draft of ten pages, yet there were times when I had written ten pages in a single day on the same book.

The chapter was the book’s most important one, where the protagonist and his pursuer face off, and it had to be as close to perfect as I could make it. So when I re-worked a few lines that had been giving me trouble and found that they finally flowed, it made me very happy. I was done for the day!

And if I didn’t write a word on any given day or days, I knew I would be, soon enough. Because the book was always writing itself in my head, whether I met some magical daily quota or not.

I don’t count how many words or pages I write a day, I focus on whether what I’ve written is good, or even if it has potential with revisions. That’s enough for me.

Lev Raphael has taught creative writing at Michigan State University.  He’s the prize-winning author of 27 books in many genres and has also published hundreds of stories, essays, book reviews and blogs.  He edits and coaches writers at writewithoutborders.com.

Image by StockSnap at Pixabay

2 thoughts on “Should You Write Every Day?”