I fell in love with Agatha Christie and crime fiction back in junior high and read every one of her books available at our local public library.  I was captivated by her mastery of plot even then, and now, when I re-read her, I feel an even deeper sense of awe.  She was a superb story-teller, subtle and devious and delightful.  No wonder she’s been so wildly popular for nearly a century–only the Bible and Shakespeare have surpassed her in sales. 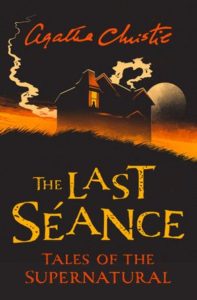 Just in time for Halloween, William Morrow has a sweet treat for Christie fans: a collection of almost two dozen creepy and ghostly tales.  It opens with a bang.  The title story revolves around Simone, an enervated medium in Paris fearful of her last séance before marriage.  Why do these séances make her so weary?  Why is she afraid of her client, a woman grieving for a lost child?  The answers are suitably shocking and grotesque.

There’s a wealth of fun reading after that.  Christie offers a neat twist on inheritance stories in “Wireless.”  “The Mystery of the Blue Jar” deftly deals with a WWI veteran’s shell-shock–or does it? “The Blue Geranium” is one of several stories where dreams play an unusual and possibly supernatural part.

Hercule Poirot uses his little gray cells to uncover a murder in “The Dream,” a story that veteran mystery readers might find a bit too easy to unravel.  But watching him amaze a room of suspects by his ratiocination is always a treat.  In “the Strange Case of Sir Arthur Carmichael,” Miss Marple profits from decades of observing human nature under a microscope in her village.  She deftly explains that a ghost story she hears over dinner is actually a tale of murder.  And what a murder!  The planning is fiendishly clever.

That indomitable village sleuth also appears in “The Idol House of Astarte,” a classic story of the supernatural with a femme fatale at its center, and told by a clergyman.  It raises the age-old question of whether a place or home can be “imbued or saturated with good or evil influences which can make their power felt.”  Miss Marple handily dismisses the many bizarre possible solutions to a strange set of crimes at a house party, but doubts still linger.

In “The Fourth Man,” a nighttime conversation in a train compartment about a famous split personality case turns very dark when one of the four men in the compartment claims to have inside information about the people involved.  What he reveals shatters the complacency of the other three–a doctor, lawyer, and minister–who discover that their view of reality is more limited than they imagined.

Christie explores that idea in more than one story, as when a “doctor of the soul” says that he doesn’t believe that spirits can be earthbound and haunt a particular place, but he has more than once seen “a kind of blind groping towards justice–a subterranean moving of blind forces, always working obscurely towards that end. . .”

Justice is served throughout the collection, most deliciously in my very favorite story, which is also one of the shortest.  “The Wife of the Kenite” follows a German veteran of WW I to his unexpected destiny in South Africa.  It’s chilling fiction, gorgeously written and perfectly wrought.

The shadow of that war looms over many of the tales. Even though they explore the supernatural and dark themes like avarice, jealousy, and revenge, they’re often quite funny. Poirot’s complaints when he gets to Egypt in “The Adventure of the Egyptian Tomb” are priceless.  And then there’s Christie’s satire of inarticulate English gentlemen “who dislike any form of emotion, and find it peculiarly hard to explain their mental processes in words.”

Flashes of lovely character assessment like that and quickly evocative description are just some of the many delights in a collection that offers entertainment, suspense, deep human interest–and mystery, of course. Mystery of more than one kind, that is, since the eerie last story suggests that the “supernatural is only the natural of which the laws are not yet understood.”

Lev Raphael is the author of 26 books including nine Nick Hoffman mysteries, most recently State University of Murder.  He teaches creative writing online at writewithoutborders.com.

I had never believed in ghost or spirits or anything like that until my mother came to me after she died.

Actually she called. From New York.

A heavy smoker, my mother had suffered from multi-infarct dementia for almost a decade.  The last time I had heard that voice, she was speaking soft Russian baby talk, having returned to her first language. It was strange but oddly comforting because she was in a mental hospital for observation, yet as calm and affable as a hostess at a party trying to put an awkward guest at ease.

The deep smoker’s voice I remembered speaking many languages besides Russian when I grew up became more and more distant over that decade she was ill. I missed talking to her, which was deeply ironic, because my mother was such a voluble, excited, intelligent talker that she often ignored whether you were interested in what she was saying.

Opinionated and extremely well-read, she didn’t just love the sound of her voice, she reveled in the workings of her own mind. She was like Katharine Hepburn who once told an interviewer that she didn’t drink, “Because cold sober, I find myself absolutely fascinating.”  And she had that actress’s steely determination. 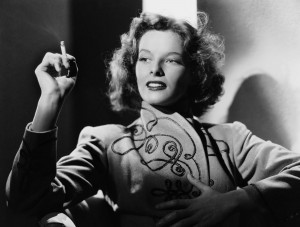 She was also a fierce believer in my talent as a writer who never got to see my career take off. Perhaps most bitterly for me, the woman who had been reading mysteries for as long as I could remember succumbed to her dementia before she could read even one of mine.

I didn’t miss the conversational juggernaut my mother could sometimes be, but I missed her voice. And then I heard it again. I was in Michigan in bed and the beige retro phone by my bed rang around 3 AM. “Cookie?” It was one of my mother’s childhood nicknames for me, and I hadn’t heard her use it since I was in elementary school.

“Mom, is that you?” I repeated it several times until she said “I’m all right.” Then she hung up.

The phone rang again. This time it was my brother telling me that our mother had died a little while ago.  “I know,” I said sleepily. “She just called me.” He didn’t ask what I meant, though later he told me how disappointed he was that she hadn’t spoken to him after she died since he was one of her caretakers, so I assume he believed my story.

Right after my brother’s call, I couldn’t figure out if I’d been dreaming, or if somehow she had actually called me, or if I’d been dreaming and she had entered my dream. Whatever really happened, the shock of her being dead was assuaged by the fact that I more and more believed she had in some way reached out to me from somewhere to comfort me. Better still, she had given me a precious gift: the sound of her voice.

Now, you could say that my mother was ill and had been in a rapid decline for weeks, so this was nothing more than a wish fulfillment dream, just my longing to be in touch with her one more time. You could say that my subconscious created the illusion of the call to make accepting her death easier, and that I was easily persuaded because I wanted to be connected to her.

Lev Raphael is the author of 25 books ranging from memoir to mystery and you can find them on Amazon.