That’s the buzz at Columbia University where students published an editorial complaining about reading Greek myths in one of their classes. They said in part:

“Ovid’s ‘Metamorphoses’ is a fixture of Lit Hum, but like so many texts in the Western canon, it contains triggering and offensive material that marginalizes student identities in the classroom,” wrote the four students, who are members of Columbia’s Multicultural Affairs Advisory Board. “These texts, wrought with histories and narratives of exclusion and oppression, can be difficult to read and discuss as a survivor, a person of color, or a student from a low-income background.” 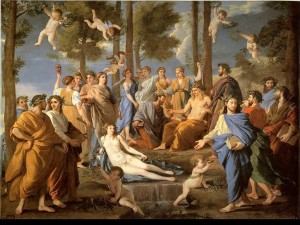 I would expect Columbia students to write somewhat better and not misuse the word “wrought,” and also to have italicized Ovid’s long poetic work that retells Greek myths rather than using quotation marks of any kind. Those things aside, what are they doing in that class? Why are they reading any texts in the Western canon if they feel the way they do?

I was in love with Greek mythology when I was in elementary school and I came from an extremely low-income background. These amazing stories fired my imagination, and though I wasn’t a person of color, I was a minority as a Jew in a majority Christian country. Worse than that, I lived in a house steeped in horror and trauma because my parents were Holocaust survivors. Greek mythology offered me escape, not oppression. It didn’t exclude me, it offered me wings. Anything that was different and exciting gave me a pathway to freedom.

Is there any book anywhere that couldn’t require a trigger warning? Think of The Great Gatsby which some students have complained about for its domestic abuse, graphic violence, and suicide. As blogger Abigail Breslin puts it so well:

“In reality, trigger warnings are unrealistic….They are the dream-child of a fantasy in which the unknown can be labeled, anticipated, and controlled. What trigger warnings promise — protection — does not exist. The world is simply too chaotic, too out-of-control for every trigger to be anticipated, avoided, and defused.”

What would be helpful and productive is for professors to do what many I know already do: ask students at the beginning of a class to inform them privately if they have any issues that might interfere with classroom learning and proceed from there. But blanket warnings on syllabi or books themselves are a waste of time and verge on the ridiculous.