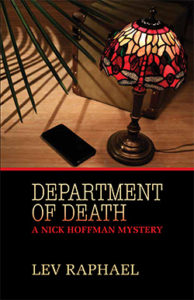 In my academic mystery series, I exiled professors to basement offices well before The Chair became a series starring Sandra Oh.  I’ve seen much worse behavior and it’s inspired my fictional English department since the 90s.  The New York Times Book Review has noted that “The Borgias would not be bored at the State University of Michigan, that snake pit of academic politics.”

Of course they wouldn’t.  Academia  has the egomania of professional sports; the hypocrisy of politics; the cruelty of big business; and the inhumanity of organized crime.

But fans sometimes ask me if academia is really that bad.  Are professors that selfish, backbiting, and ungenerous?  Yes, they can be. Academic culture from school to school has quirks and even idiocies that make great material for satire (and crime).  Sometimes the behavior is egregious, sometimes it’s just ridiculous. Either way, it’s great fodder for fiction.

Here’s a case in point.  At one private college where I read from one of my most successful books, I wasn’t brought in by English or Creative Writing faculty, but by a different department.

I love readings.  I have a theater background, years of experience on radio, and I’ve done hundreds of readings on three continents. I’ve also taught workshops for writers on how to do readings; they require practice, art, and planning.

Only four people turned up for this particular campus reading, and the disappointed coordinator explained why.  Whenever she brought in a speaker who writing students would naturally be interested in, English and Creative Writing professors consistently failed to do anything to promote the reading.  They wouldn’t be co-sponsors, didn’t encourage their students to show up, and basically boycotted the event.  Why?  Territoriality.  Apparently they felt that  they’re the only ones who should be inviting authors to campus.

It made me laugh, because it seemed so typical of academic pettiness.  But it also made me sad because the writing students might have learned something and enjoyed themselves.

I never obsess about  numbers when I do a reading: 4 or 400,  the audience deserves my best, and that’s what I gave them at this college.  Too bad the small-minded English Department and its writing professors don’t do the same, don’t really care enough about their own students to point them towards opportunities right there on their own little campus.  It makes you wonder how else they may be giving students less than they deserve as they jealously defend what think is their turf and nobody else’s.

Lev Raphael’s latest academic mystery is Department of Death.  He mentors and coaches writers as well as edits manuscripts in all genres at writewithoutborders.com.