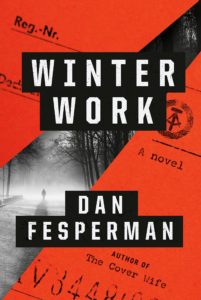 In my many years as crime fiction reviewer for the Detroit Free Press, one of the best mysteries I ever reviewed was Dan Fesperman’s Lie in the Dark, set in war-torn Bosnia. It was brilliantly plotted, beautifully written, and stunning in every possible way.

His latest book is just as thrilling.  Set in the chaos of a crumbling communist East Germany not long after the Berlin Wall has been breached in 1989, Winter Work tells twin stories of an American CIA agent and a former Stasi agent whose lives connect in surprising ways.

Long before East Germany (the DDR) was falling apart, high-ranking Emil Grimm felt “irretrievably” convinced “that the state he served had become corrupted beyond salvation, and that he had become a willing party to its inevitable decline.”  Having relished his Stasi privileges and having used his own power for revenge, he was filled with remorse–and that’s not his only secret.  Grimm’s personal life involves a bizarre sort of ménage-à-trois which might condemn him in the eyes of even liberal-minded Westerners.

Grimm and a Stasi colleague have hatched a plan to escape from the ruins of their country which hasn’t even reached its 50th birthday, by attempting to trade information to the Americans.  But they’re not the only ones on the market as “CIA people were scurrying all over the Berlin area, seeking to make friends of their old enemies in hopes of prying lose their secrets.”

One of those CIA operatives is young Claire Saylor, tasked with contacting a Stasi agent whose name she doesn’t know and whose information is mysterious but presumably valuable.  Her on-site boss is critical, suspicious and withholding, and Saylor has to rely on a retired agent for backup on each rendezvous.  His spycraft augments hers and they forge a dynamic and entertaining  bond.  Unbeknownst to Saylor, however, the KGB has her and Grimm in its sites and a mission that looked relatively simple becomes hair-raising, dangerous, and bloody.

That’s because in the DDR, someone is always watching: “After more than forty years of training their citizens to keep their eyes one another, one could never take lightly the idea of having your movements go unnoticed in the German Democratic Republic.”

Inspired by real events and deeply researched, Winter Work has everything you expect in a top-notch mystery/thriller: characters to care about, a fascinating setting, and a plot that keeps you guessing and on edge.  Fesperman was a Berlin-based journalist and his knowledge of the city is crucial in making this book both intimate and electrifying.  There aren’t many crime novels I lose sleep over, but this was one of them and I didn’t mind because the rewards were so rich and satisfying.

In winter, the forest bares its secrets.  Hill and vale are revealed through disrobing trees.  Mud and bone arise from dying weeds.  Woodpeckers, taking notice, pry deeper on leafless limbs and rotting logs.  Their drumbeat goes out like a warning.

Lev Raphael is the author of ten crime novels and seventeen other books in many genres.  A former guest author at Michigan State University, he currently mentors, coaches, and edits writers at https://www.writewithoutborders.com.