That’s right.  Your role in contributing to climate chaos isn’t just based on the SUV you drive that gets crappy gas mileage, or the plastic bottles you keep buying, or the ways you waste energy at home.  A key component is the jeans you just can’t stop purchasing.

You’re probably wearing jeans as you read this–half the planet does on most days.  That’s according to the eye-opening new book Fashionopolis which explores the global clothing industry–an industry that employs one out of six people around the world–and how it’s contributing to environmental catastrophe. 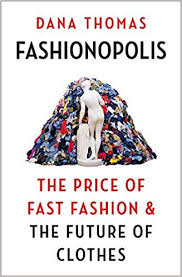 Jeans are made of cotton, a crop that requires vast amounts of water and pesticides.  Making jeans and stone washing them to create various levels of chic also involves far more water than you can imagine, with the attendant waste and pollution from the chemicals needed to dye them added to the toxic mix.  And it’s not just drinking water that this overpopulated planet is running low on–it’s water used in manufacturing “fast fashion,” throwaway clothes.

But you love your jeans, right?  They’re popular, comfortable, fashionable, and many brands are cheap.  That relatively low average cost contributes to environmental degradation and fosters inhumanity.  Just like five-dollar t-shirts, jeans are often made by grossly underpaid, maltreated workers in Third World countries. Many of them are locked into factories behind guarded, barbed wire fences and work in conditions as deplorable and unsafe as early 19th century sweatshops were in New York.  Maybe even worse.  Fatal fires, illnesses, building collapses are endemic in that garment gulag.

Journalist Dana Thomas is an expert, knowledgeable, riveting guide taking us from Bangladesh to Belgravia to Brooklyn as she explores the role of jeans, the garment industry, and the global clothing supply chain and how it’s all strangling our planet.  In colorful scenes, portraits of key figures in the world of fashion, and insightful interviews, she brings to light how “fast fashion” like the clothes sold by Zara is choking our air, dirtying our water, and filling our garbage dumps.

Yes.  The number one item in dumps around the world is clothing that people have worn maybe just once and then tossed because they wanted something new right away.  Think about that the next time you buy something just to photo yourself wearing it for Instagram and pitch it the next day.

During her travels around the world, we learn how the ever-expanding use of cotton has revolutionized and poisoned the world, how the indigo plant lost out to dyes because they’re cheaper, how NAFTA has made the situation worse, and how workers have suffered illness, injury, and even death.

Is there hope?  Hell, yes.  Sustainability is a concept slowly taking hold in Fashionopolis, as is slow fashion, “a growing movement of makers, designers, merchants, and manufacturers who, in response to fast fashion and globalization, have significantly dialed back their pace and financial ambition, freeing themselves to focus more on creating items with inherent value, curating the customer experience, and reducing environmental impact.”

Thought-provoking, thorough, revelatory and darkly entertaining, this is a must-read book for anyone concerned about climate change.  It might make you consider joining an environmental action group like Extinction Rebellion.  At the very least, it’s bound to make you think harder about what you wear and why you might be making choices that have global consequences.

Lev Raphael is the author of 26 books in genres from memoir to mystery.  He’s reviewed books for Huffington Post, the Detroit Free Press, the Washington Post and other publications as well as on public radio stations in Michigan. 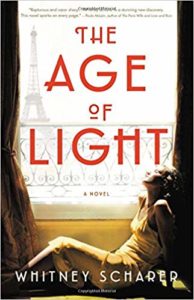 I’ve been a fan of Daniel Day-Lewis since The Last of the Mohicans, which I’ve seen many times. As the critics say, nobody inhabits a role the way he does. So after all the raves for Phantom Thread, and the Oscar nominations, I expected to swoon over what’s apparently going to be his last film.

He plays Reynolds Woodcock, a successful haute couture designer in London in the 1950s who’s meticulous, eccentric, obsessive, and an uber-curmudgeon. Someone “noisily” buttering her toast at breakfast can apparently spoil the equilibrium of his entire day. Woodcock’s no-nonsense, stylish, highly efficient  sister is his business partner and their bond is intense.  Then a disruptive force comes into their lives when Woodcock invites Alma, a waitress he meets outside of London, to move in, work at his atelier, and be a model.

And that’s when the movie slowly goes off the rails, losing all psychological believability. We don’t know anything significant about Alma’s background–and barely anything about Woodcock’s–so the attraction between them seems shadowy and even creepy.

It becomes more than that when Woodcock impulsively decides to marry Alma and almost immediately finds her a malign influence on his couture business: “There’s the smell of death in this house” he laments to his sister, and he can’t concentrate on his work. As if we’ve switched to some kind of dark fable, Alma poisons him to get him under her control. Twice. And he seems to enjoy it.  I’m not making any of that up.

None of this is convincing or coherent in a movie that relishes surfaces: beautiful interiors, gleaming dress fabrics, pearls shining on aristocratic necks.  What’s sadly missing in this film that drags on past two hours is background and depth.  Who are these people, really, and what makes them behave the way they do?

On a more basic level, but just as important, what’s Woodcock’s status in the world of fashion?  Why are his clothes suddenly not fashionable enough for some clients?  The gorgeous surfaces and the inside view of the intense labor involved by a whole team of people to create couture may be dazzling–but they cover up way too many gaps and ambiguities.

Lev Raphael is the prize-winning author of twenty-five books in genres from memoir to mystery.  He teaches creative writing at Michigan State University and on line at writewithoutborders.com.

The New York Times recently reported that fashion designers like Jason Wu and Diane von Furstenberg are turning to Instagram for inspiration and to take the pulse of their fans.  They monitor where and how fans are wearing their designs and also poll fans for opinions and suggestions for their work.

The iPhone app is apparently “generating 25 times the level of engagement of other social media platforms.”  So when will publishers start pushing their authors to switch to this hot new social medium that’s outpacing Facebook and Twitter?

Think of the possibilities!  Authors could find out where and when fans are reading their books.  They could post and enhance photos of themselves on tour and at work. They could post images of how they imagine their characters, seek advice about book covers, and generally engage with their fans 25 times more than they do already on any other social medium and have their photos instantly posted to Facebook, Twitter, Flickr, Posterous and Tumblr.

Every aspect of their lives, from morning to night, could be photographed and commented on.  Best of all, the Instagram community doesn’t seem to generate the kind of snark other platforms do.

And if they plunged into the new, new thing, they could also catch up with the shifting social media landscape, discovering why Instagram is so hot, why Facebook acquired it for one billion dollars, and why it has this stellar track record, as Kelly Lux reports on her blog:

The possibilities for authors and their fans are endless, and publishers will no doubt be relentless in chasing after the next Holy Grail of PR.

If they’re not doing so already.