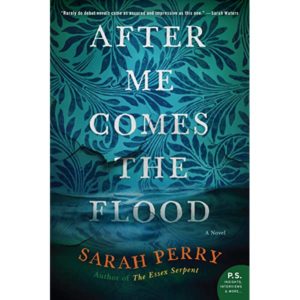 It’s a blistering summer in London after months of drought. Birds are dying in the street and people are fleeing the city for anyplace cooler. One of them is bookseller John Cole whose business has either collapsed or never been successful from the beginning.

Unable to bear the heat, Cole leaves London, but he forgets his directions to his brother’s seaside home, has no GPS, gets lost and ends up at a house that is so creepy it might as well be haunted.

That house is dilapidated and inhabited by a motley assortment of people who could be refugees from the drought or former patients of a mental institution–or both.  One of them is obsessed by the possible collapse of a nearby dam and inspects it nude at midnight, another is a pastor who has lost his faith in God–or so he says.  Then there’s the mystery woman whom Cole instantly loathes and someone else who tries corrupting the pastor as if it’s a game.  Everyone there seems to see the world and themselves askew–or have some kind of secret.

The house is filled with strange rooms, strange packages, and these strange people, but the strangest of all is probably the man writing about his experiences among them: Cole.

Wandering from his abandoned car, he’s been cheerfully greeted as if he was expected but soon realizes that everyone’s mistaking him for someone with a similar name. Questions proliferate: What was the peculiar assemblage waiting for? Why does Cole continue to pretend to be someone else? Why not go back to his car and drive home?  What’s causing his crippling migraines? Does he really have a stutter and memory problems? Or is he actually mentally unstable?  Can we believe anything he says or is he hallucinating?  After all, when he comes upon the house that seems hidden in the woods, he says “It seemed to me the most real and solid thing I’d ever seen, and at the same time only a trick of my sight in the heat.”  Cole keeps referencing the heat and his exhaustion as if they’re inimical and malignant forces bent on torturing him.

The author has said she’s delighted that the book raises so many questions and has so many possible interpretations.

This eerie, hypnotic novel is not as large in scope as Perry’s later books Melmoth and The Essex Serpent, but it’s just as captivating. And she’s as masterful a creepy story teller as Patrica Highsmith and Stephen King, both of whom seem to be just around the corner on every page.  It’s a gripping, haunting puzzle, mixing mystery and surrealism in beautiful proportions.

Lev Raphael has reviewed for the Detroit Free Press, The Washington Post and three Michigan public radio stations, one of which hosted his author interview show.