Michael Dirda at The Washington Post has your life in books all figured out.  He recently explained that whether you read fiction or re-read fiction is completely dependent on your age.

When you’re young, you love re-reading books or having the same books read to you. Later on you read series and then engage in competitive reading. In college required reading that takes up your time, and once you graduate and box up those books, you only read best sellers.

Finally, as a senior, you have no interest in new books, so you re-read old favorites.  Why?  Get ready for some cheesy prose:

Seen it all. Been there, done that. It’s then that people nearly always do return to the books they loved when young, hoping for a breath of springtime as the autumn winds blow.

Did you hear some melancholy violin music playing in the background?  I know I did.

There are no studies quoted in his musings, no statistics, just the writer making gross generalizations based on his idiosyncratic experience.

I’ll share my own experience as a reader and longtime reviewer for newspapers, radio stations, and online magazines.  See how it matches yours.

I’ve been re-reading books ever since elementary school.  It started with The Three Musketeers and I, Robot.  Then it moved on to various books by Henry James whom I discovered in junior high school and truly fell in love with in college along with Edith Wharton, D.H. Lawrence, Virginia Woolf, Jane Austen, and George Eliot.  I’ve revisited all of them periodically over the years.  I didn’t wait to become an AARP member. 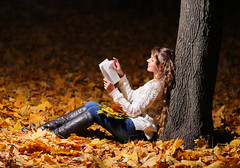 And I never competed with anyone. Reading was always private for me, an escape and a joy.  That’s unlike Dirda, for whom page count conferred “cachet.”  He writes that in “ninth grade, I doggedly worked my way through a two-volume history of English literature mainly to show off.”  Mine is bigger than yours surely had to be more interesting than that.

But I guess not.  Imagine having that kind of sterile competition to deal with along with all the other problems of mid-adolescence like acne, gossip, and embarrassing parents.  And what kind of brain-dead school did he go to that encouraged such a twisted view of reading?

While I had plenty of required reading in college as an English major,  I often went beyond those reading lists to read widely, especially books in translation by Russian and French authors: Turgenev, Gogol, Balzac, Zola. If that meant not finishing a required book in time for a class, my own choices usually won out.  But if we were assigned a novel by Henry Fielding, I wandered off and read several other books of his to get a better feel for his literary universe.

My detours were always fun. Assigned to read Samuel Richardson’s Pamela, I felt obliged to read Fielding’s hilarious parody Shamela.  The first book is all about a good servant girl beset by a lascivious lord and the triumph of virtue; the second is all about that servant girl conning the same lord into marriage.  Why isn’t Downtown Abbey’s Julian Fellowes sinking his teeth into that nasty little masterpiece?

As for being a slave to the best seller list, I feel sorry for Dirda if that’s how he lived his post-college years.  I haunted bookstores back in the day and usually looked at what was new and hot, but sales and publicity didn’t matter to me.  What counted was whether the subject or the writing grabbed me. Preferably it would be both.  And there’ve been dozens, maybe hundreds of best sellers over the years that friends and reviewers have raved about that have left me cold.  Sometimes nauseous (or nauseated if you prefer).

Starting in the 1990s, I spent many years as a book reviewer in print, on-air and online.  I sometimes re-read a book I was crazy about, like Terrill Lankford’s LA thriller Shooters and Charlie Huston’s vampire PI book Already Dead.

But my full initiation into reading a series has only come in my 50s with books by Bernard Cornwell, Martin Cruz Smith, and C.S. Harris. Nonetheless, I’m still always on the lookout for writers who’ll engage me and take me on a fresh voyage. Writers like the amazing Lori Rader-Day, Janet Fitch, and Penelope Fitzgerald.  The genre can be fiction, but I’m a big fan of biography and history too, as long as the prose is fine and the narrative engaging.

Michael Dirda may have his theory about how readers read, but it’s really just a theory until he can back it up with facts.  Though theory could be too elevated a term.  It’s more like a notion, and a fairly dubious and ageist one, too.

Maybe he’ll explain the use of slow cookers for various age groups next.

Lev Raphael is the author of 26 books in genres from memoir to mystery, most recently State University of Murder.  You can read his latest interview about it here.