We have two feisty and super-smart West Highland White Terriers who seem to love TV–each in different ways.  Television is as important to me as reading and because I write mysteries, I watch a lot of movies and crime series, domestic and foreign.  I’m always curious to see how other writers develop character, work twists into their plots, and create believable dialogue.

And I’ve been surprised that the dogs enjoy it, too, though obviously they have different interests.  Our six-year old, Rudi, is fascinated by a wide range of things, and after dinner, he sits in the kitchen waiting for us to say, “It’s time for TV.”  While we’re cleaning up, he trots into the living room and plants himself on a chair or ottoman opposite the 65-inch screen, waiting. 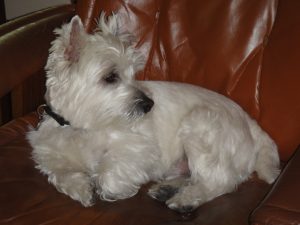 Rudi is happy watching nature specials and enjoys simple scenes like the wind sweeping across a planted field, rippling the wheat or corn.  He also sat there riveted by most of Babe.  At the end of that movie, he turned to us and moved his lips like the animals he’d been observing, and he does that every now and then when he’s excited about something.

He’s been no fan of the dragons in Game of Thrones or zombies in The Walking Dead.  He races to the set to bark at horses tearing across the screen as they do somewhat too often in Poldark, but he seems especially fascinated by extreme closeups of people expressing intense emotion.  At those moments, I watch his ears twitch and his head move from one speaker to another.  Sometimes his eyes go wide if characters are yelling or crying.  Both Westies are fascinated by fast-paced chases and fight scenes like the ones in the Jason Bourne movies.

Rudi’s half-brother Ravi, who’s just over two years old, is a typical little brother and often seems drawn to whatever Rudi is watching or barking at.  But emotion triggers something extra special in the little guy. We were all watching Daredevil last week and I reacted intensely to a car crash that left the driver trapped upside down near her dead passenger because I have some lingering PTSD from a car accident of my own.  I gasped during that scene in the show and Ravi raced onto the couch and started licking my face as if to reassure me.  It’s happened before, and sometimes he responds even when I’m silent but experiencing surprise or momentary distress at what’s on the screen.  He’s clearly been observing my face.

So TV nights at our home are layered: my spouse and I are watching the screen, but we’re also watching the Westies, who watch each other, the screen and us, too.

A veteran of university teaching, Lev Raphael now offers creative writing workshops online at writewithoutborders.com.  He’s the author of the health club mystery Hot Rocks and 24 other books in many genres.

People are surprised when I tell them that our older West Highland White Terrier loves watching TV.  He even watched almost all of Babe, and when it was done, he looked at us and started moving his lips like the dogs and sheep in the film.  True story.

He’s doing more viewing than ever as the summer’s gotten hotter, since he likes staying inside an air-conditioned home and it’s much less taxing than keeping an eye out from the entryway windows for anyone who dares to walk down our street. He enjoys TV in different ways. People running or chasing one another alert and intrigue him. He’ll bark at animals of all kinds or try to chase them across the large screen, though sometimes he’ll just peer at them.  If he observes a critter he’s never seen before, like a giraffe or rhino, he always turns around and looks at us as if asking for a name or explanation. Unless he’s just saying, “Dude, did you see that?”

We’ve named certain common animals for him and if you mention them away from the TV in casual conversation (cow, camel, horse, etc.), he’s likely to run into the living room and wait for one to appear, whether the TV is on or not.

He seems to appreciate dramatic emotional confrontations between people that involve close-ups.  I’ve watched his eyes dart back and forth, his ears twitch, and he’ll either sit close to the screen and follow every twist and turn, or jump up on an ottoman about six feet away and watch in more comfort.  Occasionally he perches on the end of the couch or in a cozy small leather chair.  He’s clearly fascinated.  What does he make of these moments? I can’t imagine.  But the intensity is what seems to hold him riveted.

Booming sound tracks and massive explosions in thrillers bore him, while car chases don’t.  If he is bored, he just curls up and falls quickly asleep wherever he is, though sometimes he does that right in front of the main speaker of our home theater system, which seems a quirky choice.

I’d love to be able to talk to him about his favorites types of scenes of just see inside his mind for a little while and experience a movie through his eyes.  But watching him is entertaining enough.

We didn’t realize that he was such a TV fan until we noticed that after our dinner and his, we’d find him in the living room staring at the blank screen from one perch or another.  If we’re busy, now we put on Netflix’s soothing footage of coral reefs called  Ocean Wonders to keep him entertained until we’re ready to tune into something we’ve already DVR’d or a movie we’re renting for the night.

He does not like the news at all, and these days, neither do we.