It’s pretty common to hear writers talk about their first drafts as “shit” or “shitty.”  Sadly, even some of my student writers do it.

They have a model in Anne Lamott’s Bird by Bird.  If she puts it that way, she must be right, and she says all good writers write them.  Seriously?  How does she know this for a fact?

“Shitty” is an adjective I’ve never used to describe my first drafts.  It’s also a word I’ve never used in any creative writing class or workshop I’ve taught  And I discourage my student writers from using it because I think it can be damaging. It can undermine how you feel about your work.

You get writers used to applying a word like that to a first draft and it’s too easy for them to survey their work in dark times and think, “This is total shit.”   Writers have to deal with enough doubts about their abilities as it is.

None of the first drafts of my hundreds of stories, essays, reviews, or blogs were “shitty.”  Some were even pretty good. Surprisingly good. But I always knew they were just a starting point and that they would always need much more work.  That’s a given, it’s part of the process. 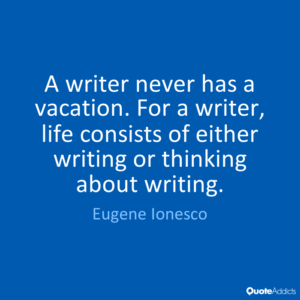 For me, any first draft is just opening a door.  I feel a sense of adventure and expectation because I never know where the piece will end up.  Sometimes it goes right into the waste paper basket if I’ve printed it off–or I just delete the file.  So what?

But slamming it as “shitty,” even if I’m frustrated or disappointed, is setting a road block in my own way.  The drafts may be a mess, sure. Sloppy, unfocused, rough, undisciplined, chaotic, jumbled, scattered, unpolished, inferior–any words like that will do.

The world is full of nasty critics–don’t be one of them when it comes to your own writing.

Lev Raphael is the author of Writer’s Block is Bunk (Guide to The Writing Life) and 24 other books in genres from memoir to mystery.