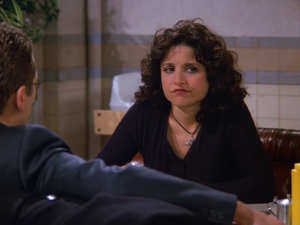 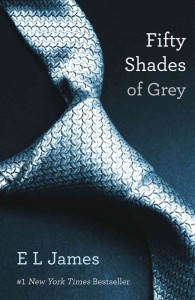 Yes, I know the book is awful in every possible way. I’ve blogged about it several times on The Huffington Post and just recently, in a sex writing workshop, I used one of its sex scenes as an example of very bad writing. Here’s some of the excerpt  I chose:

His hands run down my body and over my breasts as he reaches the dip at the base of my neck with his lips. He swirls the tip of his nose around it then begins a very leisurely cruise with his mouth, heading south, following the path of his hands, down the sternum to my breasts. Each one is kissed and nipped gently and my nipples tenderly sucked. Holy crap. My hips start swaying and moving of their own accord, grinding to the rhythm of his mouth on me….Reaching my navel, he dips his tongue inside, and then gently grazes my belly with his teeth. My body bows off the bed…..His nose glides along the line between my belly and my pubic hair, biting me gently, teasing me with his tongue. Sitting up suddenly, he kneels at my feet, grasping both my ankles and spreading my legs wide. 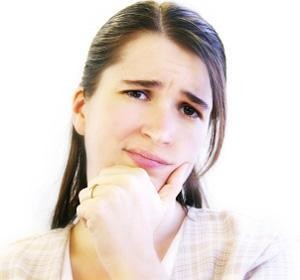 To prepare for the workshop, I’d gone over Fifty Shades of Grey carefully a month before which is why when I saw the excerpt below all over Facebook recently, I had to cry Foul!  I knew it was fake. And I was also pretty sure I had previously used the same freaky and funny lines quoted when handing out a list of winners or runners-up in the Bulwer-Lytton bad writing contest to a fiction writing class. Or I’d at least considered using them. 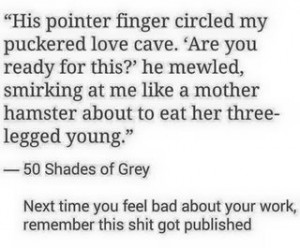 As bad a writer as James is, this isn’t her special kind of bad. This is different. It’s just a shade more grotesque. And while Christian Grey is lots of things, none of them interesting, he doesn’t mewl. Maybe the book would have been better if he had.

So there I was on Facebook, letting people know the quote was bogus, after defending such greats as Oscar Wilde and Mark Twain from misquotation.  I asked people not to re-post it.  Why? Because E.L. James deserves full recognition for her own brand of lousy writing and nobody else’s, thanks to her trademark lines like “My subconscious has reared her somnambulant head.” and “I slice another piece of venison, holding it against my mouth.”

A classic is a classic, after all.