He wasn’t joking, and it sounded like something wise and mysterious Yoda might say if he taught a writing workshop. I wasn’t sure what it meant. But I soon discovered.

Bringing a book out is filled with hazards and opens you up to a whole new set of disappointments and frustrations.  You might hate the book cover the publisher comes up with.  There’s the possibility of bad reviews.  Really bad reviews.  The kind that lodge like a splinter in your brain.

You could be plagued by miserable turnout at readings and signings.  Someone else could publish a similar book that gets way more press attention than yours.  And of course, there’s the quicksand of weak sales.

But before the book even gets published, you enter the strange world of production.  When the book comes back to you from a copy editor, it’s been transformed into something very different, almost alien.  Your labor of love is now just a product.  As you work through the corrections and suggestions page by page, the book feels very much less than the sum of its parts.

Your baby is reduced to markups relating to spacing and capitalization, and what can seem like an endless series of queries.  Sometimes the copy editor isn’t tuned in to your material.  In one book I mentioned the Temple in Jerusalem.  The query was: “What’s the name of that temple?”

I resisted the temptation to get snarky, but when I had one copy editor completely rewrite the style of my first person memoir, I said No way.

Of course, a good copy editor will catch repetition, a mistaken quote, imprecise or awkward phrasing, and other problems that would embarrass you when the book came out.  But whether you agree or disagree with suggested changes, seeing it marked up with countless notes, you can feel like Gulliver tied down by the Lilliputians.  And you can’t tell anymore if the book is what you wanted it to be or not.

Next you get the page proofs, by which point the book you thought you loved can feel like an albatross and you just want to be rid of it.  Especially if you’ve moved on to writing or researching something else.

Obviously, it’s better to have these problems than not have them, but if you haven’t been published yet, be prepared….

Lev Raphael is the author of Writer’s Block is Bunk and 24 other books in genres from memoir to mystery.  He teaches creative writing online at www.writewithoutborders.com. 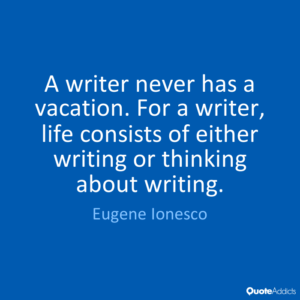