A New York lawyer’s rant about Spanish-speaking workers at a Fresh Kitchen recently went viral, and rightfully so.

The lawyer was infuriated to hear Spanish, which the counter workers were speaking to each other, and to some customers.  He’s not only intolerant, he’s ignorant.  Since the time when it was still called New Amsterdam,  New York City has welcomed people seeking freedom and opportunity, whether they spoke Portuguese, Dutch, German, Italian, Polish, Yiddish, Vietnamese or any other language.  Hundreds of languages are currently spoken in New York.

Many immigrants might not know English when they get here and perhaps may struggle with it all their lives.  But if they don’t learn it or learn it fluently, their children do.  It’s a pattern that’s been repeating itself one generation after another and has helped us become ever more diverse. 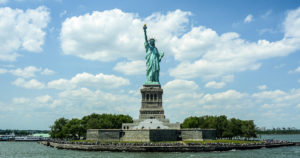 When my parents came here in 1950 from Eastern Europe via Belgium, my mother spoke English, but my father didn’t and he had to learn it at his place of work.  Between them, they spoke close to a dozen European languages.  While Yiddish was their everyday choice, they often switched to Russian because they wanted privacy from me and my brother.  But they could speak it in public, too, and they did.

I heard several languages in my apartment building and grew up in a neighborhood where you could hear German on the streets, and then later Spanish.  I never felt threatened.  I felt the opposite.  These other languages were siren calls for me to make myself fluent in a second language at the very least.  And something more: they fueled my desire to travel outside of the country and experience other cultures as authentically as I could.

I teach on a campus with several thousand Chinese students.  They don’t frighten or enrage me.  I find the experience fascinating since Mandarin, Cantonese, and other languages spoken in China aren’t like any language I know or have studied.  Hearing spoken Chinese, I feel connected to the world outside my small Michigan college town, even if I don’t know what’s being said.  And I’m reminded how connected we all are, which makes me want to re-double my efforts in learning Dutch, my latest challenge after having spent two amazing weeks in Flanders.

As for hearing employees speaking to customers in something other than English, my mother spoke Polish with the butcher she frequented, and Russian whenever she realized a store employee was from somewhere in Russia.  I envied her knowledge, flexibility, and fluency.  And if a guy like the lawyer at Fresh Kitchen had gone postal about her not speaking English, I’m sure she would have had a wide range of terms to put him in his place.  But politely, because she was always dignified, and her English had a British tinge to it.