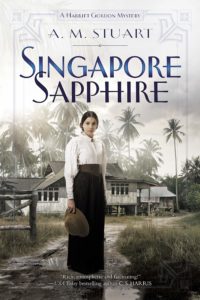 Because I’ve had wonderful trips to Flanders in the past few years,I’ve been developing an interest in Flemish crime fiction. I recently discovered and reviewed Styx, a fantastic crime novel by Bavo Dhooge (pronounced Bah-voh Dough-hey). That book led me to another Flemish thriller, Baudelaire’s Revenge by Bob Van Laerhoven. Scandinavian crime writers currently dominate the discussion of European crime writing, but based on just these two marvels, maybe their Flemish cousins are on the way up…. 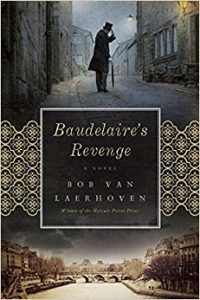 The book’s events take place primarily during a national catastrophe: the Franco-Prussian war, which is about to devastate Paris. “With the trumpets of war blaring in the background and [Napoleon III] delivering pompous declarations about the grandeur of France, all sorts of things were apparently permissible.” The city has been frantic with real estate speculation, sexual and political corruption, séances, Satanism, and spiritualism. Opium and nude women dancing with snakes in nightclubs are just some of the escapist delights available for the cognoscenti.

A literate ex-army police commissioner who’s a combination of “hermit and whoremonger” is handed a bizarre case. The ghost of poet Charles Baudelaire might be committing grotesque murders—as revenge for his mistreatment while he was alive. It’s a terrific opening conceit. I mean, what author hasn’t imagined savaging his or her critics—more power to you if you can do it from the Beyond. But the criminality has a more improbable source, if you can believe it, and the novel turns on dark, nasty, sublimely twisted secrets—as well it should. This is a book where poetry and perversity reign, with a deft nod to Edgar Allen Poe.

The police commissioner is aptly, ironically named: Lefèvre (the fever), and the author has fun with other character names. Lefèvre has previously gone up against many insane killers, has a “bloodhound reputation,” bears “the scars of pitiless duels,” and is obsessed with sex and death. He’s not the only feverish character in the book: le tout Paris seems on the verge of hysteria, a breakdown, or revolution. And over everything, the increasingly gruesome murders drift like the foul miasma of a sewer….

Lev Raphael is the author of 25 books in many genres, including the guide for writers, Writer’s Block is Bunk.  You can take creative writing workshops with him online at writewithoutborders.com.“Studying creative writing with Lev Raphael was like seeing Blade Runner for the first time: simply incredible.”—Kyle Roberts, MSU Class of 2016