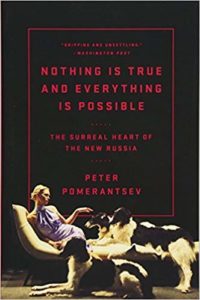 When I’m on a book tour fans often ask me “What are you reading?”  I get the same question when I teach a creative writing workshop or master class like I just did at Oakland University, sponsored by Rochester Writers.  I’m often reading books that will inspire me to write and lately I’ve been-re-reading favorite authors like Martin Cruz Smith.  His novels set after the fall of the Soviet Union explore a country that’s just as cruel and dangerous, but one where oligarchs are becoming swollen with daring, arrogance, and billions in wealth. 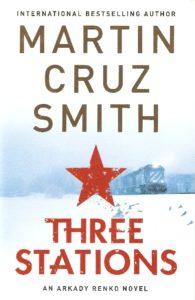 In Three Stations there’s a gigantic contrast between diamond-studded luxury goods and homeless kids stealing whatever they can to survive in the heart of Moscow. Arkady Renko is a disgraced police investigator with a clear eye for what’s happening around him and a dedication to justice. Though he’s the son of a famous general and communist, he is truly an outsider because he won’t follow orders. I’m really glad I missed this one somehow as I worked through the series, because I found it really inspiring.

And for authors who struggle with writing good sex scenes, he dispatches one in a brilliant paragraph that could be a model for anyone. It inspired me in my stand-alone currently about 200 pages along which will be my 28th book.

I’m also re-reading luminous, thrilling mystery novels by C.S. Harris set in Regency England, starting with Why Kings Confess, one of my favorites in the series.  These books feature nobleman Sebastian St. Cyr who has access to all levels of society and is indefatigable in solving any crime that he comes across and intrigues him.  He’s a dashing figure with almost magically keen eyesight and hearing, and a man not remotely averse to challenging the rich and powerful.  Harris is brilliant at evoking the period through appealing to sight, sound, and smells–you can almost taste the acrid fog that’s so much a part of the era when coal was burned indiscriminately.  Who even thought of climate disruption back then?

The two authors are very different in setting, tone, and prose style.  Harris is more sensual, Cruz is more spare.  Cruz’s books ooze cynicism about old and new Russia’s corruption and greed, while Harris fields a sleuth who serves justice and believes it exists.  Both authors evoke their time and place with dazzling detail and tell fast-paced, gripping stories.

I learned years ago in my writing career that what could stimulate and inspire my work was a creative clash of voices and styles.  Reading these two different authors again right now has made me very productive: I wrote two chapters of my next mystery in under a week.  This method of reading different writers in succession might not work for everyone, and that’s something I tell all my writing students and workshop participants: find what works for you.  But whether you’re a writer or not, C.S. Harris and Martin Cruz Smith are authors you should add to your TBR pile.

Lev Raphael is the author of 26 books in many genres which you can find on Amazon, most recently State University of Murder and Let’s Get Criminal, newly released as an ebook.  He teaches online writing workshops at writewithoutborders.com.

I’ve lost track of how many mysteries and thrillers I’ve read, and not just because I’ve been reading crime fiction since junior high. I also spent a good decade reviewing crime fiction for The Detroit Free press, everything from best sellers to European mysteries in translation. I’ve even taught crime fiction courses and workshops, but it’s rare when I want to re-read a book in this genre.  Even rarer: wanting to re-read a whole series.

But Martin Cruz Smith’s Arkendy Renko series is just that good and I’m almost halfway through for the second time. Starting with Gorky Park, which was a film with William Hurt, the series of eight books is set in Russia before and after the fall of the Soviet Union.  It charts the very uneven path of Arkady Renko, a public investigator who is surly, cynical, defiant and heedless of consequences.  His father was a famous or infamous general during World War II, depending on who’s talking.  General Renko likely committed war crimes but also helped save the Soviet Union.

Arkady is nothing like the general and the name is a burden to him.  But then so is the stupidity and cupidity of his superiors, and the slovenly work other cops do. Renko is a classic outsider even though he officially works for the government and often finds himself being warned off cases or sidelined in some way.  This passage from the most recent book, Tatiana, deftly places Arkady in his milieu:

A golden youth, son of an infamous general, he had floated easily to the top.  By now, he should have been a deputy minister or, at the very least, a prosecutor, ruler of his own precinct and feasting at the public trough.  Somehow, he had wandered.  Almost all the cases that came his way were fueled by vodka and capped by a drunken confession.  Crimes that displayed planning and intelligence were all to often followed by a phone call from above, with advice to “go easy” or not “make waves.”  Instead of bending, he pushed back, and so guaranteed his descent from early promise to pariah.

Renko gets himself transferred from Moscow to a small town in Stalin’s Ghost for complex reasons and the drive to tiny Tver is the opportunity for him to reflect on how Russia is two very different countries, one wealthy and one anything but.  Leaving Moscow, there’s no

Mercedes, no Bolshoi, no sushi,. no paved-over world; instead mud, geese, apples rolling off a horse cart.  No townhouses in gated communities, but cottages shared with cats and hens.  No billionaires, but men who sold vases by the highway because the crystal factory they worked at had no money to pay them so paid them in kind, making each man an entrepreneur holding a vase with one hand and swatting flies with the other.

Cruz Smith’s dialogue in every scene crackles, especially when people are talking about today’s Russia or what they consider timeless characteristics of its people. Here’s his heavy-drinking police comrade Victor discoursing about the national drink:

“Life would be wonderful without vodka.  But since the world is not wonderful, people need vodka.  Vodka is in our DNA.  That’s a fact.  The thing is, Russians are perfectionists.  That’s our curse.  It makes for great chess players and ballerinas and turns the rest of us into jealous inebriates. The question is not why don’t I drink less, it’s why don’t you drink more?”

There’s also stark poetry in his prose.  Here’s Arkady discovering a nemesis on his street: “It was 2 a.m., the hour between sweet dreams and dark despair, a time to pace the floor, not the sidewalk.”  Or thinking about the runaway kid he’s in effect adopted: “Zhenya was Pluto, a dark object detectable more by its effect on the planets than by direct observation.”

Every book in the series is dark, deep, thought-provoking and a voyage into a country whose history, culture, and current political and social reality we need to understand much better than we do.

Lev Raphael is teaching a mystery writing workshop in June at writewithoutborders.com.  He’s the author of 26 books, including the just-published State University of Murder.